I am often asked to supply Navionics for Windows loaded on one of my navigation laptops. People are familiar with it, they run it on their phones. They would like to run it on one of my rugged and outdoor viewable units. Unfortunately, the Navionics Boating and Lakes app doesn’t run on Windows. Nevertheless, keep reading for a more thorough explanation and workable alternatives. I supply waterproof navigation laptops with GPS, AIS, 12V, outdoor viewable touch screen displays, and other available options.  If you want to get one from me, I am happy to assist you with choosing a suitable model. Please get in touch with any questions!

Navionics for Windows via an emulator

The Navionics Boating Marine & Lakes app is designed to run on Android and iOS operating systems. In 2014, they briefly had a Windows version. However, it hasn’t been available for a very long time.

It is possible to use BlueStacks, or another Android emulator, to run Navionics Boating on Windows. However, it’s not worth it in most cases. First of all, it will be quite slow due to the emulator. Secondly, you won’t be able to have a reliable GPS signal inside the emulator, even if your computer has GPS. The emulator doesn’t pass the GPS signal to the app properly. Hence, real time navigation and tracking will not be possible. This is a deal breaker for most. Believe me, I’ve tried it myself! People often ask me to install Navionics on one of my navigation laptops. I just point them in the direction of my navigation tablets which do have Navionics on them. It is possible to get Navionics charts (not the Boating HD app) on a computer in another marine navigation package. Contact me, and I can help you with that!

Not to worry, there’s various kinds of marine navigation software which do run on laptops and have similar functionality to Navionics Boating HD. I have assembled a list of various Windows marine chart plotter programs here including screenshots of their interfaces.

The navigation laptops I supply come with OpenCPN which has full chartplotter functionality. You can leave a track, plot a course, view tides & currents, mark points of interest on the map, etc. The advantages of using a navigation laptop are many. My units in particular, such as the midrange 10 and midrange 13 are waterproof and have outdoor viewable displays. They also have much bigger 4:3 aspect ratio displays with size that is relatively large to most tablets and chart plotters. 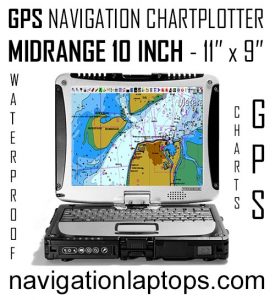 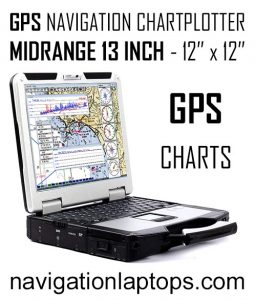 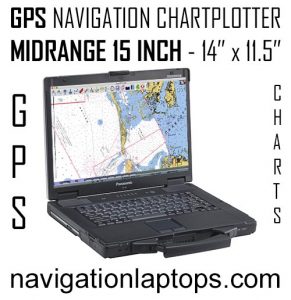 My navigation laptop or tablet systems can be much more affordable than Garmin, Lowrance, Simrad, B&G, Furuno, Humminbird, Raymarine, Si-Tex. I will also support my units forever! Furthermore, I believe that some of the commercial chart plotter brands gouge their customers. Large companies force their clients to upgrade by no longer supporting older units with chart and software updates. In addition, they charge outrageous fees for simple things like a larger screen size. I don’t do any of these things, and never will – guaranteed! In addition to these, please take a look at other advantages as well.