Wouldn’t it be nice if you could display NMEA 2000 data on iPad, Android tablet, or a PC laptop instead of an expensive MFD? You can! I supply navigation laptops and tablets, and my clients frequently ask me about adapters and NMEA data display. I’ve compiled some info on that below. Please contact me if you need an affordable & ready to use marine GPS system!

NMEA 2000 engine and other data displayed as gauges on iPad, Android or PC

Yacht Devices offer a web interface that can conveniently display NMEA 2000 data graphically, not just via text output. This works with all of their WiFi gateways and routers. These work seamlessly with all my tablet, or laptop systems! You can view the fancy NMEA 2K data without having to pay for a exorbitantly priced multi function display. Many kinds of NMEA 2000 data can be shown, as long as it’s available on your NMEA 2000 network. 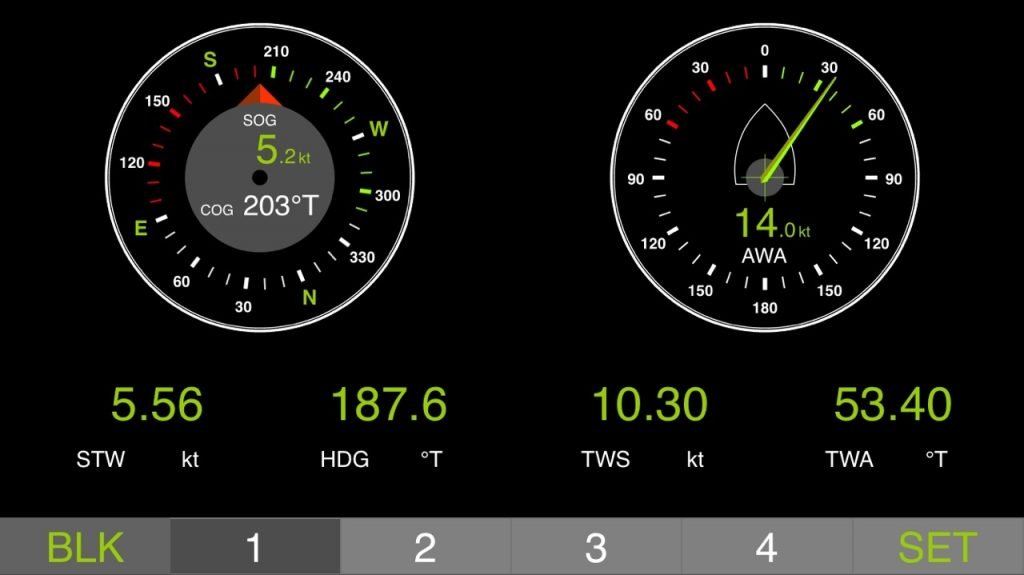 If you have a post 2003 Mercury engine and want to see some engine data, you are in major luck. This adapter (or here on Amazon) allows you to display this data on an iPad or Android via the VeselView app. It connects via Bluetooth, and many of my clients have used my navigation tablets to run it. Compatible with most SmartCraft‑capable 2003 or newer engines, 40 HP and higher outboards, gas or diesel sterndrives and inboards, Joystick Piloting, Zeus pods and Racing products.

OpenSkipper displays and integrates NMEA 0183, NMEA 2000 and AIS data from nautical instruments, GPS units and internet data sources. OpenSkipper runs on a PC (laptop or desktop) aboard your boat to show electronic instruments displaying speed, heading, etc. Open Skipper can also receive and transmit data over multiple connections, including a RS-232 serial port (for NMEA 0183), NMEA 2000 to USB adapter, and wired and wireless network connections (including TCP and UDP). It also has an integrated web server, so you can run OpenSkipper on a PC and use this to display data on an iPad or Android. All of this is FREE! Download OpenSkipper for Windows here.

My navigation laptop or tablet systems can be much more affordable than Garmin, Lowrance, Simrad, B&G, Furuno, Humminbird, Raymarine, Si-Tex. I will also support my units forever! Furthermore, I believe that some of the commercial chart plotter brands gouge their customers. Large companies force their clients to upgrade by no longer supporting older units with chart and software updates. In addition, they charge outrageous fees for simple things like a larger screen size. I don’t do any of these things, and never will – guaranteed! In addition to these, please take a look at other advantages as well.