It can be tricky to figure out to choose a PC NMEA adapter which suits your needs. You want to integrate NMEA with your Windows PC, but you’re not sure how to do the hardware and software? This is where I come in. I supply navigation laptops, including waterproof models. I can pre-configure everything you need! This includes both software and hardware. Read on to find out more about ways of connecting NMEA 0183 and NMEA 2000 devices to a Windows PC. Keep in mind that once you’ve connected your NMEA devices to a PC or iPad or Android, you need to do something with the data. Here’s the info on displaying the NMEA 2000 data. You can integrate NMEA devices such as: autopilot, radar, transducer, fish finder, AIS, and more!

My 10, 13, and 15 inch navigation laptops are the easiest to integrate with NMEA 0183 since they have a native RS-232 (DB-9) nine pin serial port. I carry the break out RS-422 / RS-485 adapter for that, just ask when you order. Keep in mind that OpenCPN and some other navigation software is compatible with NMEA 0183 but not NMEA 2000. Some software like Coastal Explorer or TimeZero do support NMEA 2000 natively. Some of the NMEA 2000 adapters can translate to NMEA 0183 on the fly in both directions or just in one direction. Below are some pin outs for various NMEA 0183 plugs. Data out on the transducer side should be connected to to data in on the computer side, and vice versa. The baud rate is 4800, and the serial port usually is COM1. Note that you’ll need to chop off one end of the NMEA 0183 cable and wire the data in on the device to data out on the adapter, and vice versa.

This device from Quark-Elec is amazing value for the money! 3 x NMEA 0183 inputs, 1 x Seatalk input, NMEA, USB & WiFi output and all for under under $110 USD! Did I mention it converts Seatalk to NMEA 0183 for that price also? This amount of functionality used to cost hundreds. 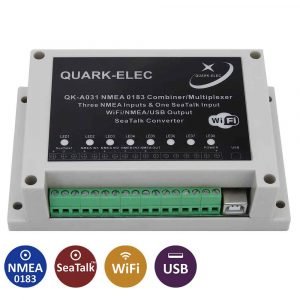 Quark-Elec also offers a bidirectional WiFi NMEA 2000 gateway which translates NMEA 2000 and 0183 messages on the fly as well. Brilliant device which provides amazing value for the money. Pretty much all the ports and output and input options you could ever need, and very reasonably priced. This also works with my navigation tablets! 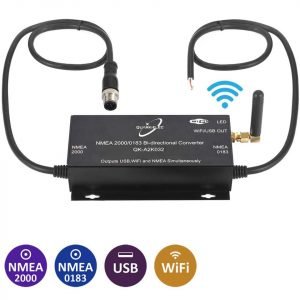 There’s always the good old YachtD NMEA 2000 to USB adapter or the NMEA 2000 Wireless Gateway. They do provide a very versatile graphical NMEA 2000 output which is brilliant. On the other hand, it’s not a multiplexer and costs notably more than the Quarck-Elec device above. If you need the NMEA 2000 gauges displayed, then it makes sense. Otherwise, the Quark-Elec is a better value in my opinion. Also compatible with my navigation tablets!

This adapter was one of the first out to market to support NMEA 2000 on Windows. They also provide a free simple NMEA 2000 display software. Shop around, many of these are comparable. If you find a good deal, just go for it. 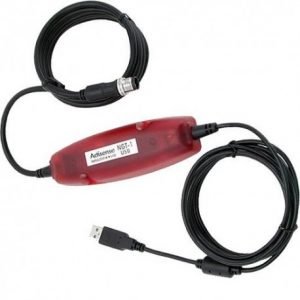 Is SeaTalk NG simply NMEA 2000, or is it something else?

SeaTalk NG is Raymarine’s proprietary cable system for use in NMEA 2000 networks. This means it’s a custom hardware form, but the signal is interoperable with standard NMEA 2000. It’s also got an extra wire compared to NMEA 2000, making it backwards compatible to SeaTalk1 equipment. Products with SeaTalk NG connectors can be used on NMEA 2000 networks via simple adapters. I feel horrible linking to WestMarine, but here you go, a $30 adapter LOL 🙂

Please take a look here for ways of displaying NMEA 2000 and NMEA 0183 info on PC, iPad, and Android

My navigation laptop or tablet systems can be much more affordable than Garmin, Lowrance, Simrad, B&G, Furuno, Hummingbird, Raymarine, Si-Tex. I will also support my units forever! Furthermore, I believe that some of the commercial chart plotter brands gouge their customers. Large companies force their clients to upgrade by no longer supporting older units with chart and software updates. In addition, they charge outrageous fees for simple things like a larger screen size. I don’t do any of these things, and never will – guaranteed! In addition to these, please take a look at other advantages as well.